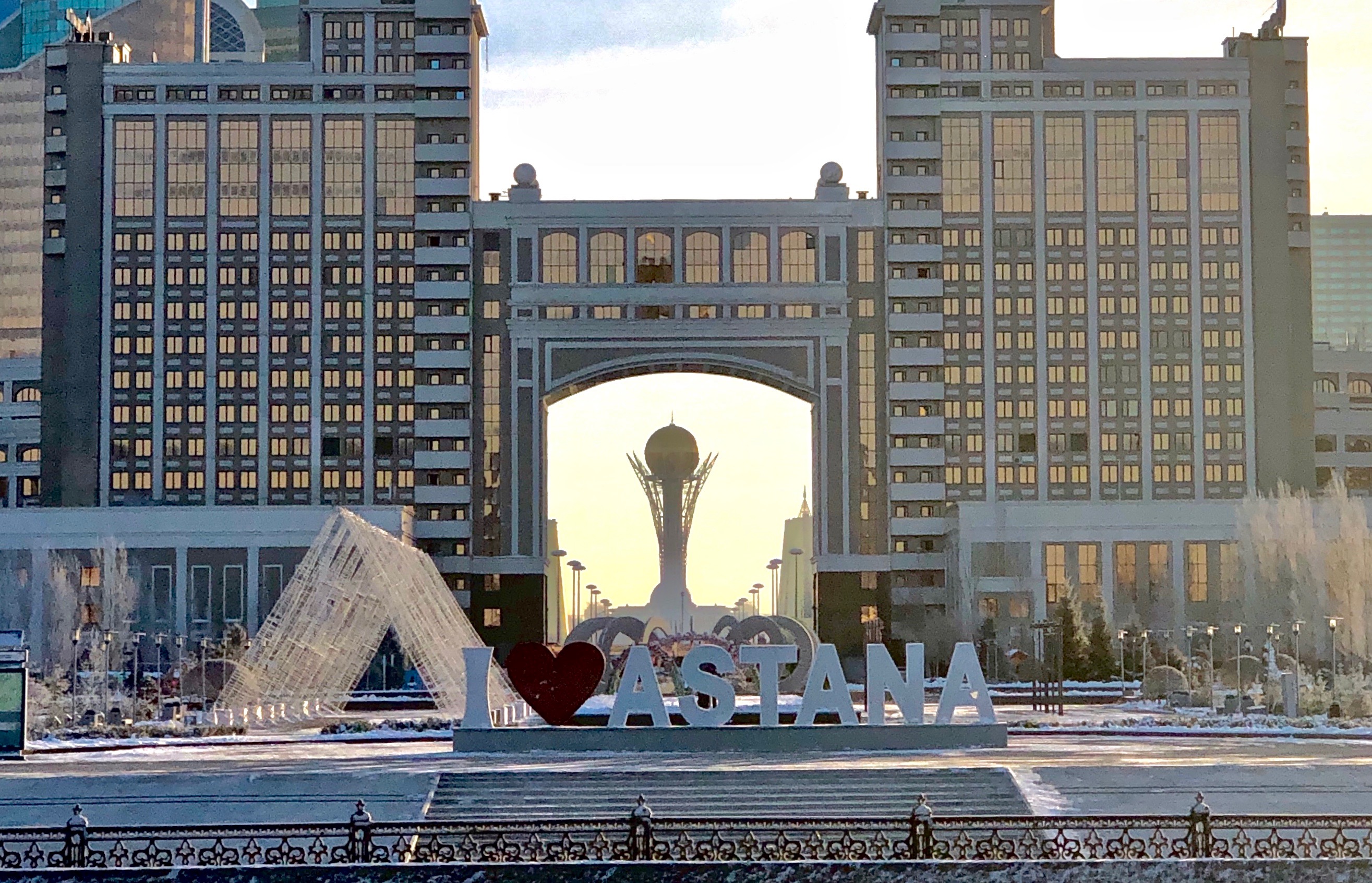 According to Kazak legend, in the desert lay the Tree of Life, Baiterek. This mighty tree supported the whole world with roots situated in the underworld and its crown extending into the clouds above. Within the branches of Baiterek was a mythical bird, the Samruk. Nothing or nobody was more beautiful than Samruk and, as a messenger from a higher being, only she could determine the sinful from the saved. Through only Samruk could the divine mystery be revealed.

The Baiterek tower in Astana represents modern-day Kazakhstan. Each year, the Samruk lays a golden egg on Baiterek’s crown. The egg symbolises the Sun, granting life and hope, while a dragon below, the Aidahar, wishes to eat the egg. This repeats infinitely and, thus, represents the shift of the winter and summer, day and night, and the struggle between good and evil.

Through Samruk we are forced to confront our past, own our reality and seek to comprehend a truth beyond.

That is the main reason why I engaged with this aspect of Kazak mythology. Not because the Samruk is on the sleeve of the Kazak national cycling jersey but rather because it triggers thoughts about what this journey means to me and why I’m out here alone in a foreign country.

Maybe it is to contemplate my past, maybe it is a unique opportunity to understand our presence in the now or maybe it is searching for something in the future.

That is the beauty of the tale of the Samruk. It can be interpreted to fit the individual needs of someone and allow them to find their own meaning.

The temperature had dropped significantly in the few days before arriving, bringing with it frozen water bottles, chilly nights and icy roads. I had hoped to get to Astana before this transition but, despite my best efforts, a few days of snowy spindrift had to be endured. It was but an aperitif of things to come.

Another around the world cyclist, Fearghal O’Nuallain, messaged me on Instagram saying, “That’s not winter! That’s the end of autumn. Brace yourself. When it’s winter, you’ll know.”

The city was described by a Kazakh friend of mine, Yerlan, as, “an oasis in the middle of a desert.” And how right he was. Having been on the Steppe for over a month, seeing the glitz, glamour, pollution and population of the capital city was bewildering and astounding in equal measures.

The capital city of Kazakhstan moved in 1997 for political (think Russia, China and natural resources) reasons and an opportunity to present a new future for the country. If one visits Astana to “experience” Kazakhstan, you would have an entirely warped perspective of a country. Not false, however, as this is now the political and cultural hub of what Kazakhstan wants to project to the world. There is a financial district, magnificent modern architecture, high rise buildings and fast food restaurants. There are shopping centres, exhaust fumes and expensive cars. All things that I had not really been privy to for a while.

I was being kindly hosted by Andrew and Fiona who have gone way beyond a normal level of kindness towards a stranger. Within a few hours of arriving cold, dirty and hungry, I was showered, satiated and sipping a cold beer in a hotel. That contrast alone felt like a representation of Astana in the middle of Kazakhstan.

There were two primary reasons for stopping in Astana: preparing for the winter and sorting the diplomatic logistics for the next leg. The former was nipped relatively simply thanks to a wonderful bike shop I found. I popped in there a few times after being offered to join them for lunch and we gradually tinkered with Dorothy to get her in good shape. A new front rack, studded winter tyres and a new chain/cassette should keep me going. On top of that, I needed to prepare my own clothing with temperatures of -35°C degrees coming my way. More down clothing, more gloves, a couple of thermos flasks, an extra sleeping bag and a balaclava are just some of the additions required.

Beyond that was the real battle; I had three visas to sort simultaneously. I needed Mongolian and Chinese visas as well as extending my Kazak visa which expires after 30 days. This whole process took a (very frustrating) month to sort. It involved leaving the country, a lot of queueing, a lot of paperwork, a lot of waiting and a lot of time badgering everyone and anyone I could think of to speed up the process.

Having made such good speed to get to Astana in order to try and beat the extreme temperatures, I could see my planned calendar floating away in a Kazakhstan snowstorm. Outside it was dropping to -20°C as I continued to fill out ludicrous forms and cycle around the city to immigration offices, embassies and consulate buildings.

What frustrated me most was that it out of my control. I did everything I could to quicken the process but the nature of foreign travel is that sometimes, Kipling’s words of, ‘If you can wait and not be tired of waiting’ come to mind. Finally, we (it became a real team effort) got there and all three visas were stamped.

Since I left home, there has been one thing lingering in the back of my mind. My route has been tinkered constantly through my own volition but I knew, one way or another, to get to SE Asia, I would need to tackle winter somewhere.

There is never a perfect way of cycling around the world in terms of seasons, certainly not when your departure date is pretty much determined by your employment status.

I am of the view that if you want to cycle around the world then that’s what you do. Of course, I can’t cycle across oceans so I will need to fly from eg Singapore to Australia and then again from Australia to New Zealand. However, I did not want to simply skip winter by flying from eg Tbilisi to India which was a possibility. Equally, I did not want to wait out the winter and set off again in six months.

For various reasons I chose to go to Northern Kazakhstan; I’m extremely happy I did. What that means, however, is that tomorrow I leave Astana and face whatever the elements throw at me.

Bob Dylan “If you try to be anyone but yourself, you will fail; if you…

Why I Love Reading

Stephen King “Books are a uniquely portable magic.” I resented reading when I was a…

Thailand: The Land of Smiles

Antoine de Saint-Exupéry "Here is my secret. It is very simple: It is only with…