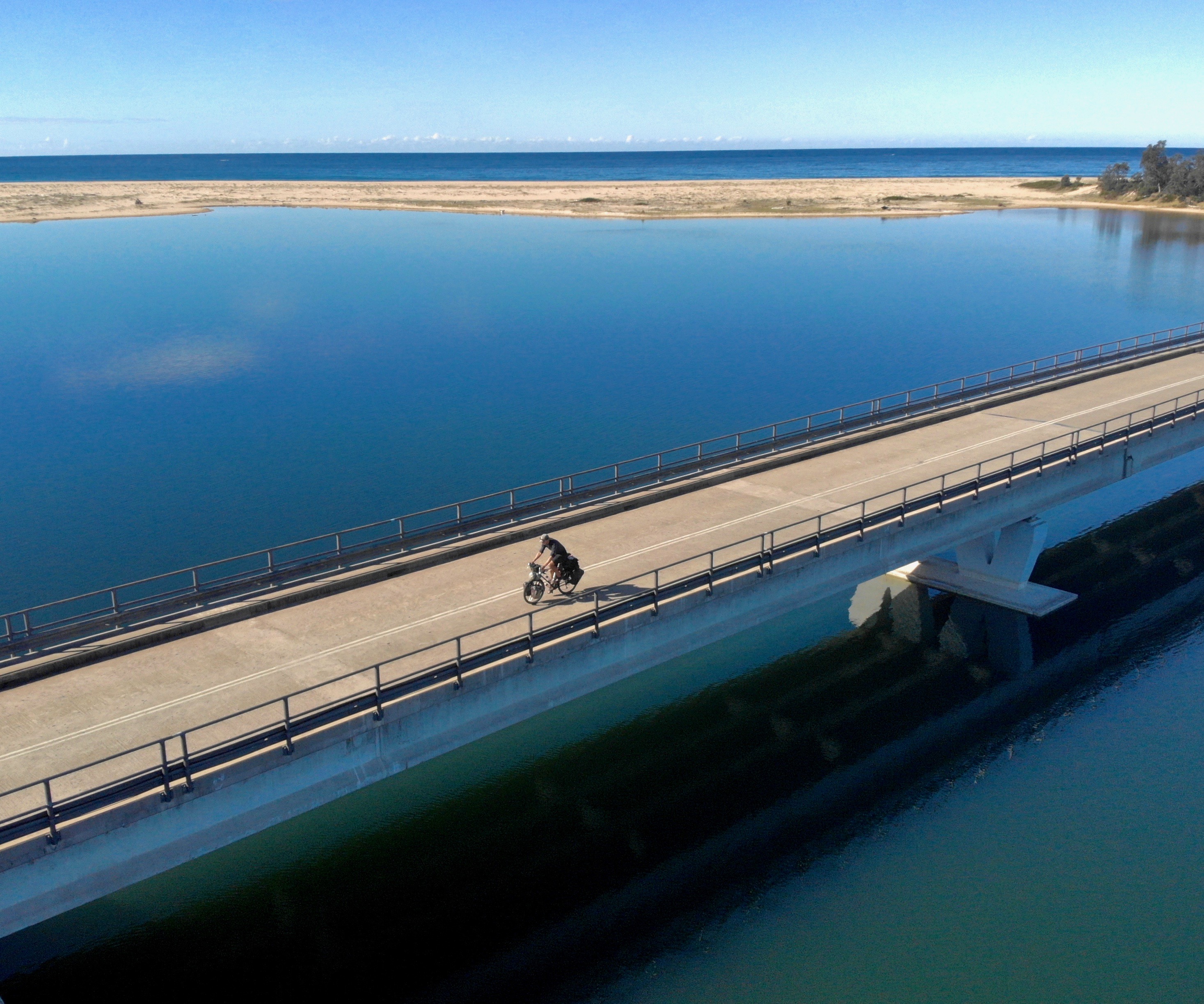 Barry Lopez
“To inquire into the intricacies of a distant landscape, then, is to provoke thoughts about one’s own interior landscape, and the familiar landscapes of memory. The land urges us to come around to an understanding of ourselves.”

The sheer scale of cycling to the other side of the world is such an overwhelming target that overthinking it would likely mean you remain at home dreaming. Perhaps that is why I delayed my preparation until a mad few weeks before my departure date. Planning for every eventuality would be a futile and demoralising process. Sometimes you just have to commit, get out the front door and try to break down an enormous target into manageable chunks.

Spend enough time alone on a bike and your mind will face the continual battle of weighing up the immediate versus looking ahead to the future. I do my best to have stints every day where I am consciously seeking to remain in the now; to be there on the road. I need to feel the breeze against my face, see the tarmac disappear beneath the tread of my wheels and hear the gentle whirring of the chain as it runs through the cassette. I avoid using my headphones and instead appreciate and understand my surroundings. At other times, I need to actively distract myself.

Occasionally I allow myself, or indeed, can’t help myself, thinking about the future. In Europe, I would imagine the space and freedom of empty deserts in Asia. In winter, I would dream about wearing my sandals by a beach. In dusty SE Asian cities, I would think about the Great Ocean Road and being in Australia.

So off I went, leaving a surprisingly sunny mid-winter Melbourne behind, with a 1,100km stretch of Australian coastline ahead of me. Alas, my enthusiasm at finally getting going and fortune with the weather was not matched by the cycling gods. A familiar wobbling rear wheel…dammit! It turned out every spoke had come loose somehow, so I walked her to the nearest bike shop about 8km away and fixed the issue. An early setback, but I hopped back on and was good to go.

For the next few hundred kms, Dorothy and I seamlessly whizzed along without issue. However, that discouraging wobble then happened again, and again. Each time the bags would need to be removed, the bike upturned and the issue identified. Without a truing stand and the right equipment, afternoons turned into evenings and I was still tinkering away to align my wheel correctly. It was not an overly technical repair job but it is a precise one that can be time-consuming on the roadside with just a Leatherman to hand.

Wouldn’t it be lovely if everything on a bike just worked? There would be no stretching chains, worn brake pads, loose spokes or shattered hubs. My front and rear racks wouldn’t be tied together with gaffe tape and cable ties; neither would my tent poles. The zip on my trousers wouldn’t be sewed together by some old thread. But oddly enough, I rather enjoy that’s the case. I sort of relish the problems encountered on this trip. There’s that unique dilemma about when to stop and make a decision to fix an issue versus ignoring it and hoping. I appreciate the challenge of botching a solution to hobble it to the nearest bike shop.

Nothing sparks creative thinking quite like necessity. I can assure you that a mechanical issue on a bike in the middle of nowhere, with nobody else about and with no phone reception certainly feels like a necessity. Those problems are the reason you give yourself a pat on the back and feel a sense of immense satisfaction when you get going again. My old instructor at Sandhurst used to say, ‘If it was easy, everyone would do it.’ That phrase crosses my mind sometimes. Perhaps that is the reason I choose not to hitchhike and instead find an absurd, and often temporary, remedy. As much as I crave smooth riding, it is, unfortunately, the breaks, bumps and battles that have taught me the most.

I had no pressing deadline or internalised need to make up time. I knew I would make it to Sydney at some stage so felt pretty content with getting back into a routine. I crossed into New South Wales and watched the distance on roadsigns to Sydney gradually decrease. I would cook breakfast just after sunrise and cook dinner just before sunset. In the short interim period, it is winter down here, after all, I would cycle as far as I felt necessary, find a quiet camping spot in the woods and prepare for the next day.

The proximity of such a big goal suddenly appearing so close and not having any time pressure, meant my mind did start to query itself a lot more than usual. This probably isn’t the right place to digress too much on that subject, it’s for a book in due course. It was an opportunity to think about the trip thus far: the whys, the future and people. It was, it is, important to do so, even if it does raise some uncomfortable truths.

Introspective cycling musings to one side, it was a superb ride. I had heard so much about the Gold and Sunshine Coasts on the east of Australia but never the Sapphire Coast. But it was absolutely gorgeous! Obviously, I followed the brown Tourist Route signs where possible and, as it almost always is when choosing scenery above speed, the decision was totally justified.

Clear blue skies, minimal wind, serene reflective lakes and beautiful lapping waves onto sandy beaches made it truly special. In an ideal world then yes, I would have preferred it to be 10 degrees warmer but now I’m just been pernickety. It was the dazzling Australian coastline that I had thought about for so many months. I thought the Great Ocean Road would tick that box but the grim weather between Adelaide and Melbourne rather denied that opportunity. This though was beautiful, comforting and felt like a deserved reward.

Typically, I had a bout of heavy rain for a few days just before Sydney which was a nuisance but not a game changer. It did, however, lead to one of my favourite #KindnessOfStrangers yet. Penny and I have been in touch on Instagram since France but I wasn’t exactly sure where she lived in Aus. After a mopey evening in my tent and accepting I was just going to be sodden heading into Sydney, she got in touch again. She offered me the chance to stop off at hers for lunch, have a shower, dry my clothes and stay as long as I wanted. She was at work so the house key was left under the mat and I could sort myself out at this little pit stop.

Such a simple trusting gesture but just so thoughtful and appreciated. I had been sweaty and mucky for over a week so something like that was a huge boost. I then stayed with her daughter, Elle, and her boyfriend (plus adorable puppy), in Wollongong, that evening. As always, people going out of their way to lend a hand to me is just such a wonderful part of this trip. Penny, Elle, Andrew and Borky, thank you.

Just 80km now to go to Sydney. This city I had dreamt about was suddenly only a few hours ride away. I was shocked to be going up an 18% incline out of Wollongong which was, to put it mildly, a “pulse-raiser”. But then, gently rolling countryside and a decent road meant I made good time and, at the brow of a hill, caught a glimpse of the city and had a rush of childish enthusiasm.

I navigated my way through the city traffic and went to the spot I had thought about most. It gave me the sight of the Sydney Harbour Bridge and the Sydney Opera House. I was here. I had made it from London to Sydney.

Have I mentioned it’s winter here yet? Australians, like Brits, and in fact, most countries I’ve been to, are fanatical about weather forecasts. Folk in Melbourne love saying they get four seasons in a day. Folk in Sydney love saying the weather forecasters are mad and never get it right. Regardless, outdoor life, fitness, coffee culture and surfing are big things here and that means the weather matters. The beaches weren’t heaving with people as they would be midsummer but I was happy sitting in Bondi Icebergs watching surfers and the famous rescue hut…oh, to be a tourist!

I managed to get a good spectrum of weather while in Sydney but cycling from Neutral Bay across the Sydney Harbour Bridge gave me a buzz every time. I totally understand how the lifestyle appeals and why so many Brits end up emigrating here; it’s a great city.

I was then reminded of how far away I was when I stood below a sign saying ‘London 17035km’. The distance from my home struck me.

Beyond the iconic monuments, museums, AFL games at the SCG, the Botanic Garden, coastal walks and coffees in the sun by the Harbour, I’ll probably remember Sydney for different reasons. I am fortunate to have a huge number of friends and family in the city. Seeing familiar faces on this trip has been, as you’re probably bored of hearing about, wonderful. Seeing familiar faces on the other side of the globe is that much more wonderful. An Everest 2010 teammate, cousins, university mates, former Army Officers and a few others…a great variety and chance to just chat and laugh without simply being asked where I’m from, where I’m going and what’s next. Jim, Sarah, Brendan, Leanne, Katie and Sam, thank you for putting up with me and your generosity, it has been brilliant. I look forward to our paths crossing again.

For now, I need to look ahead. Sydney is not the end of this trip. It was a key milestone and it has been a chance to unwind and relax. There are still people and places to see, countries to visit and many miles left on the road until this journey concludes. I fly to Invercargill shortly and from there begin another great venture all the way up New Zealand.

End of the Beginning

Emelia Lahti "You don’t see a silver lining but you jump into the storm anyway.”…