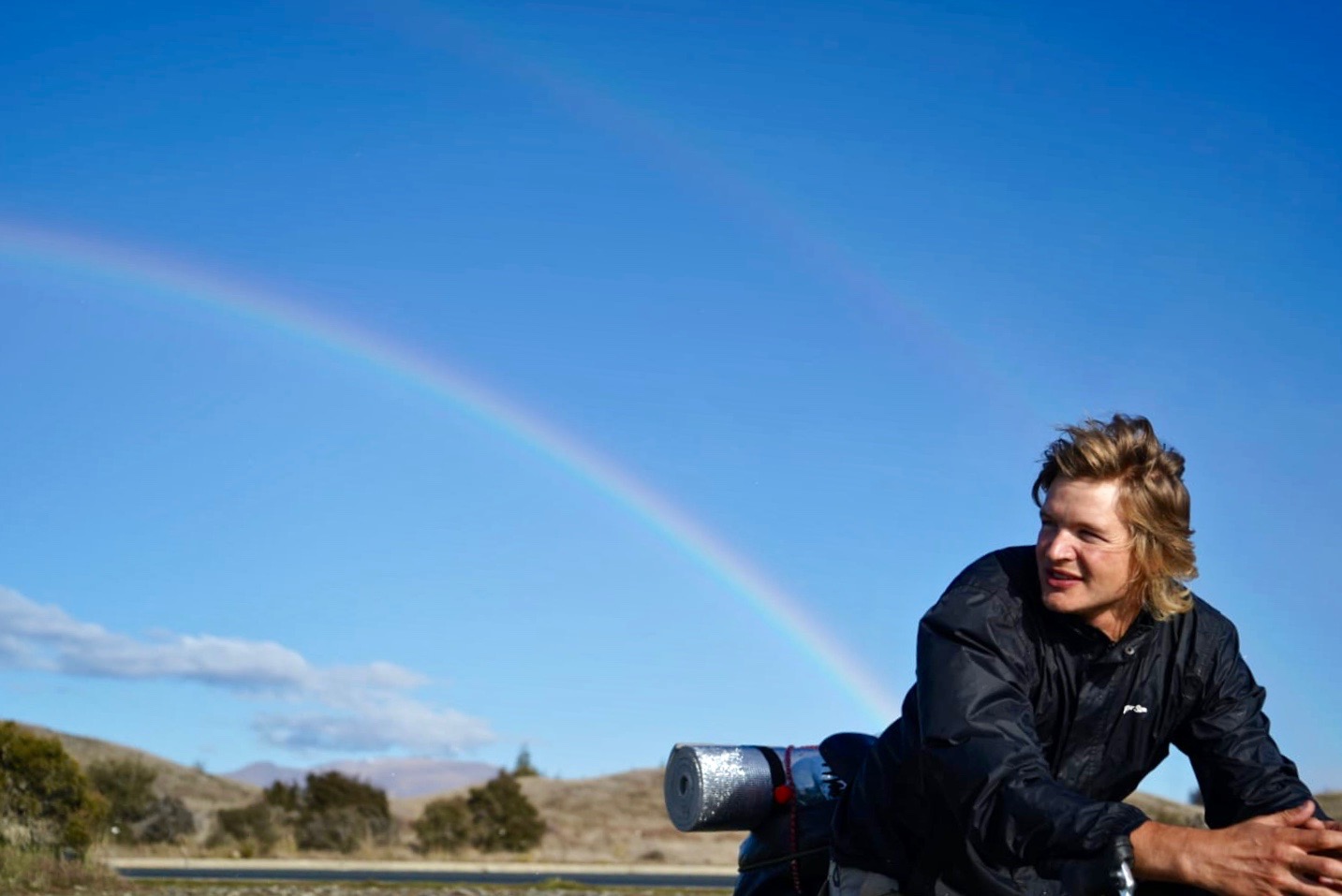 Wilfred Thesiger
“For me, exploration was a personal venture…I set myself a goal on these journeys, and, although the goal itself was unimportant, its attainment had to be worth every effort and sacrifice…No, it is not the goal but the way there that matters, and the harder the way the more worthwhile the journey.”

Someone sent me a message on Instagram a few days ago with a simple word: mindset.

I had just put up a video feeling a bit sorry for myself in the rain but felt motivated to keep going. It’s a word I’ve thought about intermittently and it subsequently went whizzing around my head once more. The fact that I was so close to Auckland, my main objective for over a year, made it particularly appropriate.

I reckoned when I left home that this trip was a feasible, albeit ambitious, one. I said the same when I was climbing: “If I just continue putting one foot in front of the other then I’ll get to where I want to go.” The same principle applied on this trip. Whether it was early enthusiasm in Europe, winter in Kazakhstan or the Australian Outback; if I just kept turning the legs over day after day then I would eventually get there.

A whole host of factors could obviously scupper my plan but that was my mindset from the off. The same applies on a daily basis as well. Some days are harder than others. Some days are sunshine and smiles whereas others can be a wet and windy battle from the off with an array of tantrums until the finish. I felt if I believed in the process enough then the outcome would take care of itself.

South Island was the part of New Zealand I was most excited about. The culture, dramatic scenery and openness is what people raved about – thankfully it did not disappoint. After that glorious ferry crossing, I arrived in Wellington, the capital of New Zealand, at sunset and found myself in North Island.

I had a number of routes available to me. I could wind my way along the east coast and take a few weeks. I could illogically connect the dots of people I knew around the island or I could put the hammer down and get to Auckland fast. I knew whatever route I took would be hilly and beautiful. I opted for the third option. After such a long time thinking about it, the city I had become fixated upon was now within touching distance. 10 planned days turned into a week, which turned to six days and then five. Just five days, that’s it!

I wanted to enjoy it, of course, but the impending end was a carrot dangling before me. Like a lung-bursting duel at the end of a marathon, or a bunch sprint after a 200km road cycling event, this was, relatively speaking, a miniscule part of the journey, but it mattered. The draw of an extra rest day in Auckland if I could keep to my schedule added yet more incentive.

I won’t bore you again with the satisfaction it gives me to see friends on this trip. My route has been so easily manipulated to coincide with the whereabouts of mates and it’s always a joy catching up with old faces in a new location. Miranda and Ben, amazing to catch up and thank you.

If you have 100 lengths to swim in a pool, getting over that 50 mark is important. Rather than counting up, you begin to count down. After leaving Wellington, I found myself counting down the days for the first time. After the first hour of the day, I would think, “Ok, once this day is finished then it’s only three to go” etc. I felt a serious motivation to keep going despite knowing that the increased mileage would be demanding. In fact, on four out of the five days from Wellington to Auckland, I ended up arriving with headtorches on and wrapped up fighting the driving rain.

Through my Army pal, Sam, I stayed with a Kiwi RAF pilot on my first night which was lovely – thank you James and Kayrn. Discussing the NZ microclimates was enlightening and furthered my belief that trusting the weather forecasts here is a totally futile occupation. I would, of course, give it a cursory glance each morning and, as per, hope for the best and prepare for the worst. My rain jackets and night lights were at the ready but I still began with just my shorts and sandals clinging onto the vague notion the winds would subside and sun would shine. It never happened.

Some days blend into one another. For a variety of reasons, others dramatically stand out; the Desert Road/World Cup Final debacle was one of them.

If you’ve followed British sport passionately (perhaps obsessively) over the years, as well as being a Newcastle United fan, then you’re accustomed to a bit of an emotional rollercoaster. We haven’t won the football World Cup for over 50 years, Newcastle haven’t won a major trophy since the 1950s and we are yet to win a cricket World Cup. Each major event brings about delusion, optimism and ultimate despair. I’m ok with that, it’s just what we do. But sometimes, just sometimes, that optimism shifts to genuine belief. And at the Home of Cricket on 14 July 2019, it was exactly that.

I pedalled through some howling weather all day in the hope I would find a suitable pub to watch the game – it began at 10.30pm NZ time. It started to get dark just as the winds picked up but who cared, this match mattered more than those trivialities. I was stopped by a police car who strongly suggested against continuing up the Desert Road in the dark with a rainstorm approaching. The Desert Road is seriously exposed and it can close in winter due to snow and high winds. I was looking forward to it due to the gorgeous mountains either side but the weather and cycling Gods weren’t playing ball. The temperatures dropped to -2 without windchill (and it was bloody windy) at about 1,000m above sea level. I had dug myself a bit of a hole and the only way out was to keep going.

I was stopped by a 4×4 very close to a town where I planned to find a pub. Josh said he passed me about 5 minutes before and had been thinking about what the hell I was doing in the interim. “I just assumed you were completely nuts but then reckoned nobody would actually want to be cycling this road in these conditions at this time of day…I wondered if you were actually alright.” He did a U-Turn. My rather feeble demeanour and World Cup explanation was enough so we headed off to his friends house who kindly agreed to take in a random Pom – Jess and Jessie, you’re both absolute legends.

After a hot shower and a few beers, I was happily sat by a fire watching the World Cup Final with a crew of Kiwis until the wee hours. I regularly spoke to George (at Lord’s) and Ed (in London) – fellow cricket affectionados – and evaluated proceedings. It ended with us all totally gobsmacked and sleep deprived at 6.30am NZ time after one of the most astonishing sporting encounters I’ve ever witnessed. It was proper heart-in-mouth, face-in-hands sporting drama. What a match!

For me, being there in New Zealand for that final was perfect. It was something I don’t think I’ll ever forget. Not because we won, that’s largely irrelevant in this regard, but because, like the class their cricket team showed, I was welcomed with such immense hospitality by strangers. That has happened across this country time after time and it means I’ll leave with almost total positivity about the place. And that’s before I even get started on the scenery, the coffee, the lifestyle etc.

That big push left me with just a couple of days to go: 300km. I made it to Andrea’s for my penultimate evening. The last time she saw me, I was ‘in utero’. Fast-forward 30 years, throw in a few stories from both of us and it was a special evening that left me feeling invigorated and contemplative.

And then it was the final day to Auckland. An observation about the bigger cities in Australia and New Zealand is that they aren’t restricted by the Green Belts we have in the UK. That means we build up, whereas they build out; each has its pros and cons. Around 1/3 of the New Zealand population lives in Auckland and it sprawls out for a long way. It made for quite a contrast to the rest of the country as well as a nuisance to get through but that was to be expected. Steep hills, darkness and rain – you can probably see a theme – don’t make for ideal arrival conditions but it didn’t really matter.

Finally, though, the numbers decreased and decreased until I pulled up to my destination and knew it was over. It was the perfect place to be welcomed to with a roaring fire, a hot shower and a cold beer. Nick and Sophie, thank you both enormously. Writing this overlooking your balcony with gorgeous tropical trees and blue skies around – there isn’t really anywhere else I want to be right now.

The difficulty of that final day meant I didn’t have time to really think about what it meant – there will be plenty of scope for that in the days and weeks to come I’m sure. I don’t feel any need for mad celebrations right now either. I acknowledge it is important to take stock of where I am and how the past year has gone. This is not the end of my journey though and I’ve known that for a while.

Auckland is, however, the place I have been aiming towards since I left home. It was always #LondonToAuckland, to the other side of the world and the farthest country from my own.

Perhaps that’s why it’s odd being here; I guess I’ve completed what I set out to do: cycle to New Zealand. I said in my very first blog post, “I head alone to the continent excited and nervous. In reality, I don’t know what to fully expect. Either way, an intriguing venture awaits.” I guess I was right. I had an idea of what was ahead but not really. I also said, “I anticipate fear, loneliness and frustration as much as I crave freedom, solitude and adventure.” I guess I was right there as well.

345 days it took me to pedal here; it’s an odd way to spend a year. I’ve been sat on my saddle for over 1,500 hours in that time. It’s a long way to pedal and a long time to spend alone. It’s also a long way from home.

This has been, I believe, the trip of a lifetime. I say that because circumstances aligned fortuitously to allow me to set off but also because I know I won’t do such a thing again. As I said on one of my videos, it’s hard to have any kind of perspective right now, I’m just happy to be here.

Thailand: The Land of Smiles

Antoine de Saint-Exupéry "Here is my secret. It is very simple: It is only with…