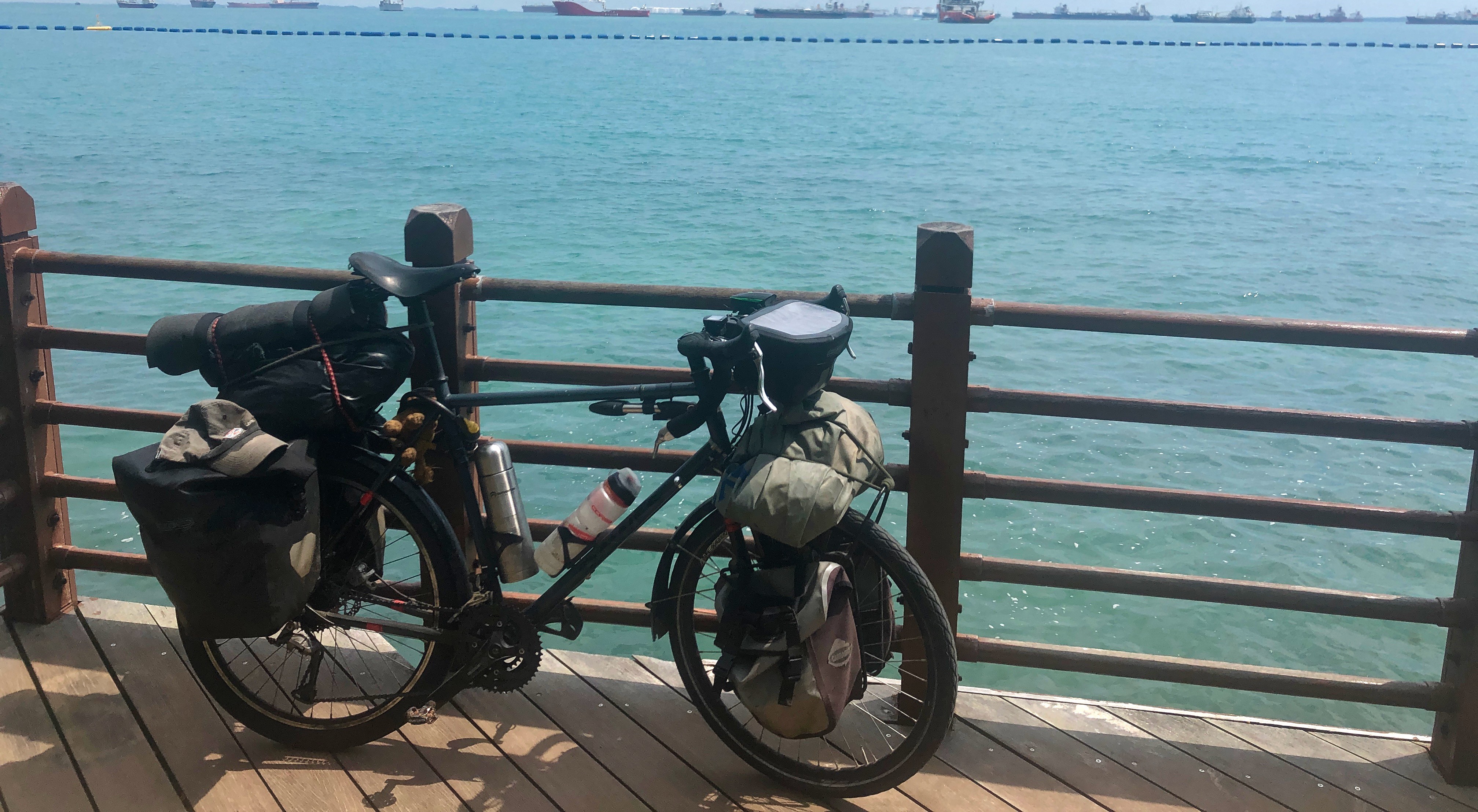 Ralph Waldo Emerson
“Don’t be pushed by your problems. Be led by your dreams.”

A lot of time spent in Thailand was reflecting upon the journey both over the past eight months and over the past ten years. It was an important internal process but crossing into Malaysia provoked a different reaction. This was the penultimate leg of my Asian adventure. That crazily distant goal of Singapore was tantalisingly close all of a sudden. A little stretch to Kuala Lumpur, a few days there followed by the final push to Singapore and I’m there, at the southern tip of Asia.

I had been to Malaysia before but it was transiting through on a bus from Thailand so my cultural understanding was negligible. Another easy border crossing was appreciated and I headed straight for the coast, found a quiet road and whizzed along a matter of metres from the sea. It wasn’t the pristine white beaches of Thailand but there’s something so peaceful about spinning the pedals with the sun reflecting down across a still sea. Bliss.

My initial impressions of the country were hugely positive. This was assisted by the border guard giving me a bottle of water upon entering the country and then being stopped by a taxi driver who happened to have studied at Pembroke College, Cambridge University. This sort of contrast and kindness has almost become the norm but still never fails to amaze me.

What intrigued me most in Malaysia was the cultural diversity. It is a multi-ethnic, multicultural and multilingual society which is evident from the outset. Whereas in Thailand, around 93% of the population is Buddhist (over 60 million people), in Malaysia, there is a noticeable melange of identities. I heard it described as “Asia in miniature” and I could see why.

The original culture stems from the Malays (>50% of the country) who moved there in ancient times but there is now a strong influence of Indian, Chinese, Persian and British cultures all thrown into the melting pot. Malaysia is located along the ancient spice route and the cultural fusion is manifested in a total array of food you can try from Keralan fish curries and smooth coconut dishes to noodle soups and fried rice variants. All those combined with street food sellers and fresh fruit make it another superb spot for a two-wheeled traveller.

Although Islam is the official state religion, the constitution of Malaysia allows for freedom of worship. This can be witnessed by an array of churches, mosques and temples spread across the country. In Malaysia, you can hear and observe people expressing their religious beliefs how they see fit which made me think back to China. Even disregarding Xinjiang, where the Uighurs are persecuted in such an oppressive way that their freedom of expression is totally inhibited, across much of the rest of the country, there was not the same liberation of thought that I so strongly believe in. Seeing it in Malaysia especially, as well as other countries in SE Asia, gave me optimism and belief.

I was happily pedalling away out of a city when I saw a fully laden bike ahead of me. I was immediately quite excited to see who it was, where they were from, where they were heading, what route they had taken and how long they had been on the road; essentially all the key components to garner a basic understanding of a fellow cycle tourer.

It was great to have a chance encounter with Emil. He is 23, Danish and has cycled 16,000km over 12 months from Scandinavia all the way across Europe and Asia to Malaysia before he intends to fly home from Indonesia. It was fun to share the road and a few meals with someone for a bit. We just idly chatted away on the bike about our experiences on the road, lessons learned and fellow cyclists we’ve encountered.

I haven’t actually cycled with anyone since Jilly and Jack flew to the South of France to join me for a few days back in August. Emil and I fumbled our way through menu choices, got the wrong food, wrong drinks and wrong portions but it was possible to laugh and share the experience instead of getting frustrated. It got me thinking again about China and how, perhaps my perspective would have been different if I was not alone and therefore didn’t feel that sense of social isolation which so dominated my time there. Alas, I wanted to push further on to get to Kuala Lumpur a day earlier so we parted ways but might meet up again in Singapore.

Ironically, in the four-hour period I was solo while Emil was happily sheltered in a guesthouse, I was caught in a typically explosive and tropical rainstorm. The storms here in SE Asia are quite something. I’ve cycled through some bad weather in the past 20,000km but Mother Nature has a way of constantly astounding me. It is as though someone has held a bucket upside down with a lid on it and then suddenly, rather than dripping it through periodically, just removes the lid, almost without warning, and observes the ensuing carnage. Everything plummets downwards, inclusive of rain, thunder and lightning. And then it stops, almost as arbitrarily as it started, but with everything a whole lot wetter. I usually seek shelter at this point but sometimes it is quite enjoyable to just keep ploughing on through the puddles and mayhem, completely sodden and delirious in the knowledge that I would dry out in a matter of hours.

A Little Help From my Friends

Navigating through the highway system of Kuala Lumpur was chaos. Not the overly congested ear-piercing chaos of Istanbul, but rather just a spaghetti-like assortment of major roads crisscrossing in all directions with a regular flow of traffic. Somehow I made it through unscathed and found myself at the base of the Petronas Twin Towers – for me, the architectural symbol of the city. They are massive – the tallest buildings in the world from 1998-2004 – standing at over 450m and 88 floors. Despite the protestations from a rather stroppy policeman, I managed to get my photo taken in front of this iconic feature.

“Sorry, you’ve cycled here from London? Of course, as one does really, pretty casual.” An amusing bunch of British tourists took the photo. They were part of a travelling band on board a cruise ship, and found the encounter quite odd as I was then escorted away by said policeman back onto the highway; another incident to add to my ever-growing list of tellings off from the authorities.

The real purpose of getting to KL was to see Linnea, another old and trusted friend from St Andrews.

I enjoy meeting and staying with strangers on this trip, it never fails to be an enlightening experience. But equally, you can never truly relax. You can’t sit down on a sofa with your feet up in front of a David Attenborough series on Netflix and sip a cold beer. You can’t admit to feeling tired and hangry and be excused for it. There’s that sort of delight at seeing friends but the other aspect is probably even more powerful. It’s the knowledge that you aren’t being judged or watched constantly. When seeing a trusted friend after being on the road for many miles, those overly apprehensive cultural formalities that travellers adhere to are not required. You can just mindlessly chat about anything in a wholly unprejudiced environment. So simple, so important and so hard to part from when the time comes.

It has been a theme from when I stayed with Pip and Ben in France after my first week to eight months down the road. In fact, I can say with almost total certainty, it will be present in the months and miles to come as well. Parting with friends is really hard. Knowing that you’re hitting the road again, turning over the pedals, not knowing where to stay or what to eat day after day; it’s a strange and disagreeable aspect of this trip.

Part of the reason I delayed my departure from KL was that I was now so close to Singapore that it no longer became an uncertain objective. I mean it was right there, just a few hundred kms away. That internal anxiety about whether I would make it and when I would arrive goes out the window. Of course I will, it’s just down the road, so what’s the point in rushing when my flight to Australia isn’t for another two weeks.

I delayed it and delayed it but finally, the time had come and onto the bike I went with a three-day jaunt to Singapore ahead.

My body was less than pleased with the transition of a sedentary existence in KL to a sudden re-adjustment to long days in the sun again but it was a necessary evil. I had two 100-mile days in the saddle but was fortunate to stay with two lovely Warmshowers hosts at the end of each which incentivised me to keep moving. In Melaka, I stayed in Khim’s music studio, he’s a guitar teacher, then with Nilam and her lovely family closer to the border with Singapore. Nilam also runs a lovely café about 10km from her home and I was so fortunate to be greeted with Malaysian ice-cream and friend bananas upon arrival to satisfy my calorific deficit.

Another encounter that will seriously remain with me occurred shortly before arriving at Nilam’s café. I got a puncture from a sharp bit of metal which led to damaged brake pads and a few other issues. Being tired, sweaty and feeling irritable already, this irked me somewhat. As is often the case, a few people stopped to watch but I just wanted to be left alone and fix what was becoming a tricky problem. Amin realised this, headed off and then returned ten minutes later with a pint of water. I was grateful but still slightly on edge, just wishing they’d leave me be. Again, he got the hint and headed off only to return ten minutes later with a coconut, soy milk and crisps. In his words, “That is the teaching of Allah, to look out for others and help them.” What a wonderful gesture and enough to give me a little psychological kick to get to my destination.

I See the Sea

And then the final day, a 100km ride to Singapore. It was a teary few days actually realising this seemingly blurry checkpoint was coming into full focus. More thoughts on that another time. I had an amazing couple from St Andrews waiting for me, Teddy and Jenny, who I was massively excited to see. I spent the day excitedly counting down the distance to Singapore and, after painlessly entering the country, had one clear point to aim towards. I didn’t just want to get to Singapore, I wanted to get to the tip of mainland Asia.

There is an island on the southern edge of Singapore called Sentosa. At the southern edge of Sentosa, there is a distinctive rope bridge. It clearly states no bikes (understandable given the width and awkwardness to pass on it) but I felt as though I deserved it. I took a photo by the sign and then went to the edge of the water and stopped to ponder over the journey I had been on.

This trip has been everything I could have hoped for and more. 19 countries, 249 days and 21,000km after setting off from home in the UK, I have crossed two continents: Europe and Asia. I will write a few reflections in due course, but for now, I think it’s time to find my friend, find a bar and grab a few beers.